The entrepreneur wanted to take his creativity to the next level as he entered an Image partner meeting with a six inch action figure and proclaimed to all of his compatriots that he was going to start making toys.  His vision was simple, add more paint, more deco and more articulation than the competition and I will have a winning action figure.

Fast forward to 2019 where Todd announced that his very first Mcfarlane Toys’ figure (Todd Toys at the time) Spawn will be updated with today’s action figure standards (most of the standards Todd created) and will be his first crowdfunding campaign. 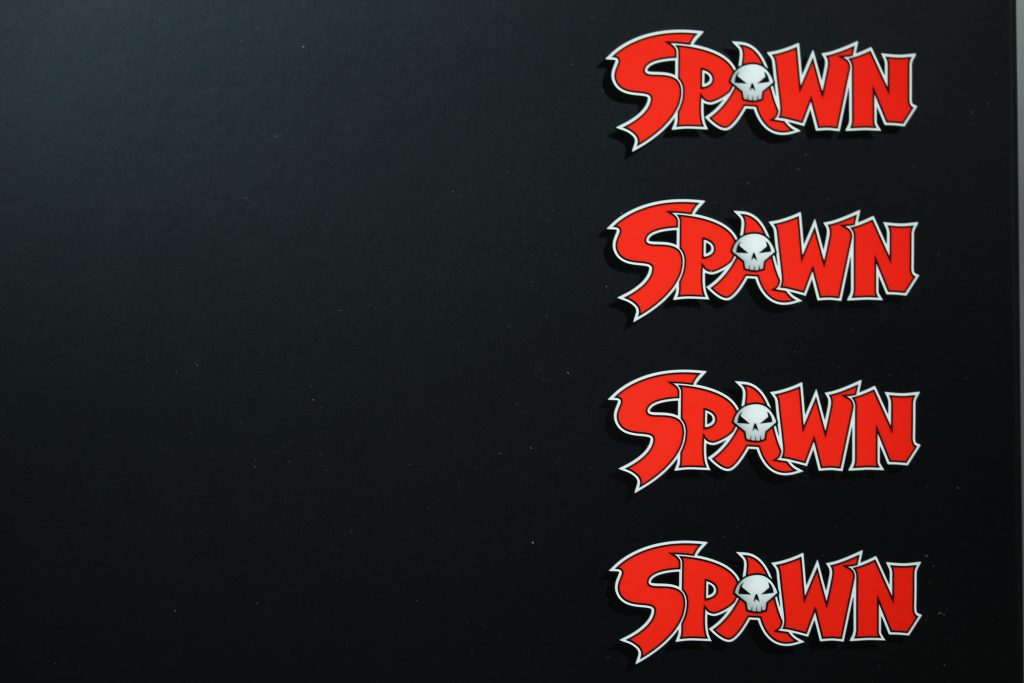 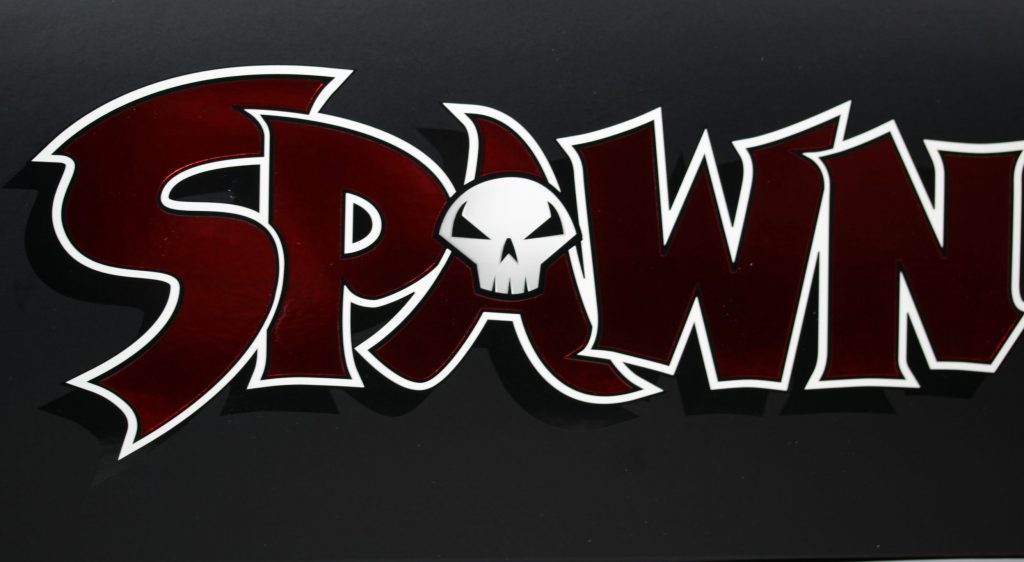 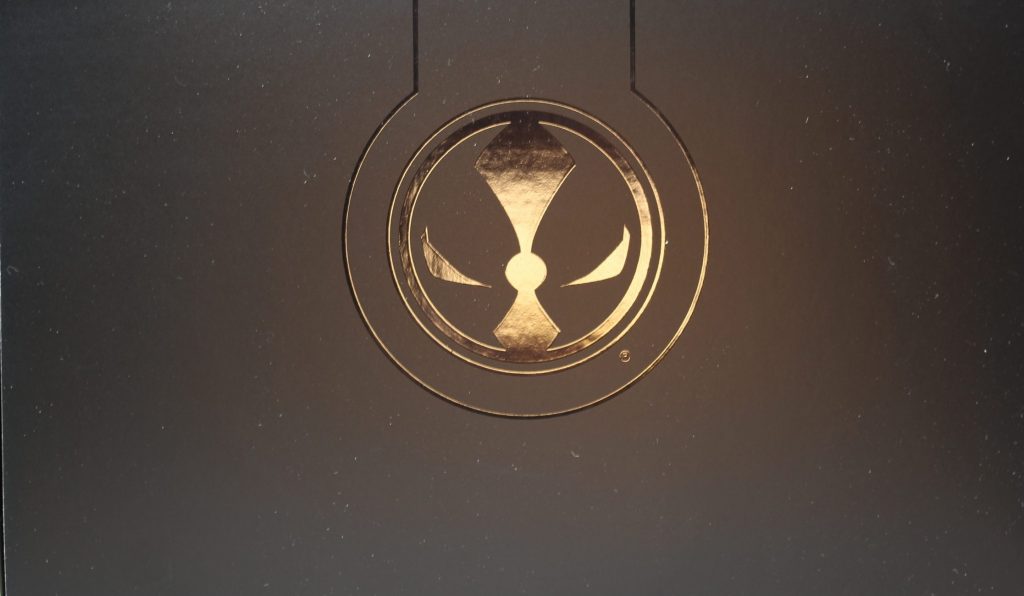 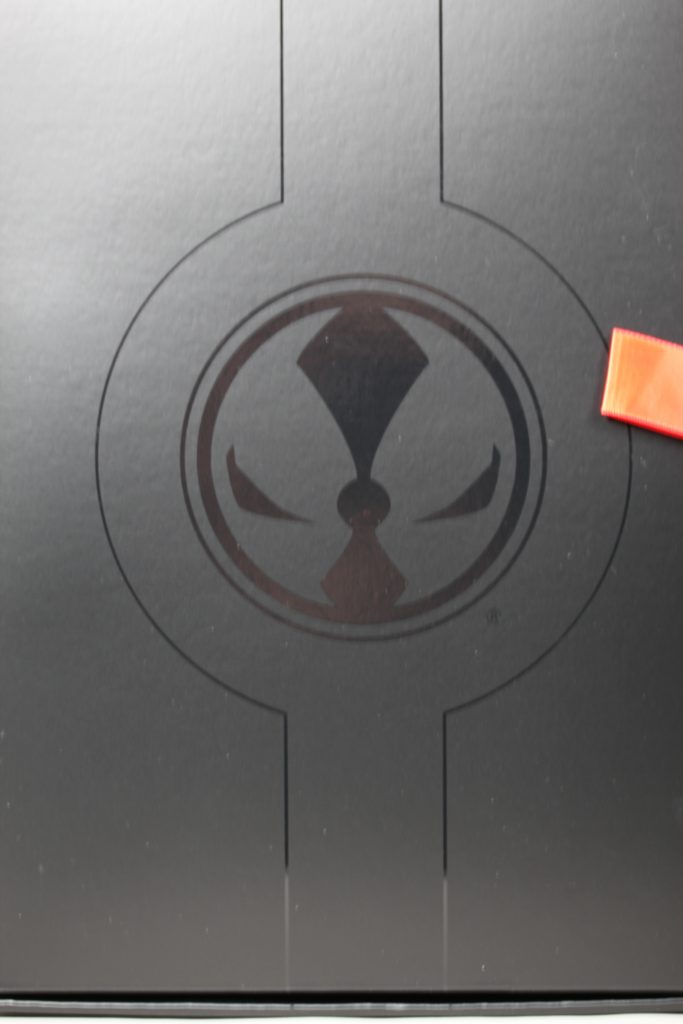 The outer protective sleeve is made from a slick finish bearing the Spawn name in reflective red which creates a nice shine to the box.  Once removed the box itself is a bookcase box adorned with the Spawn logo reflecting off the box. 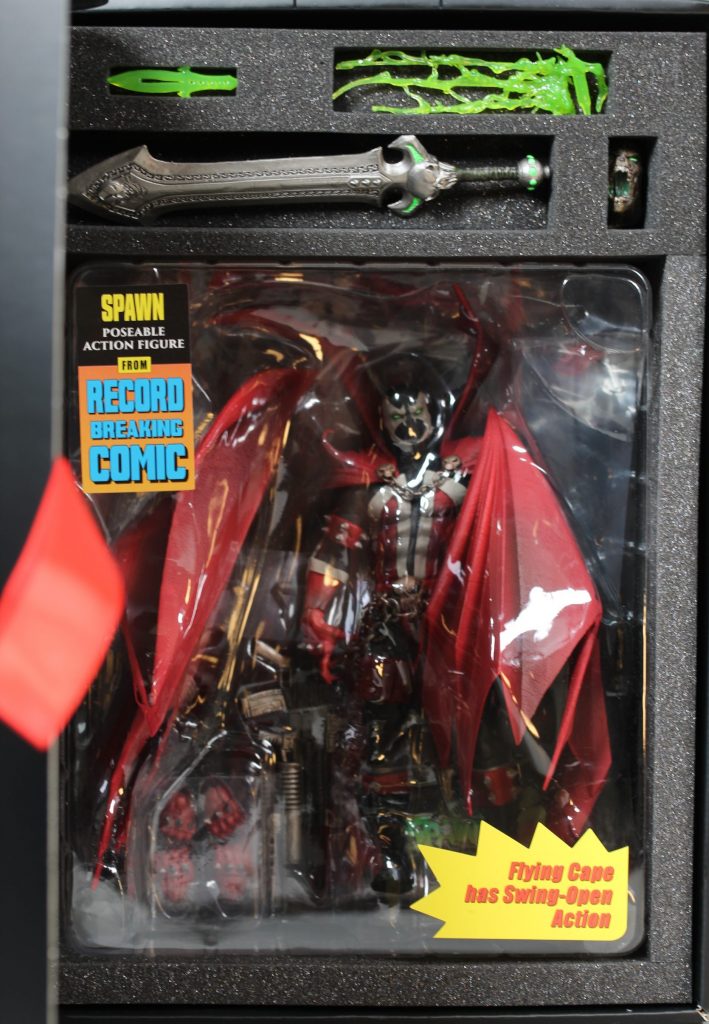 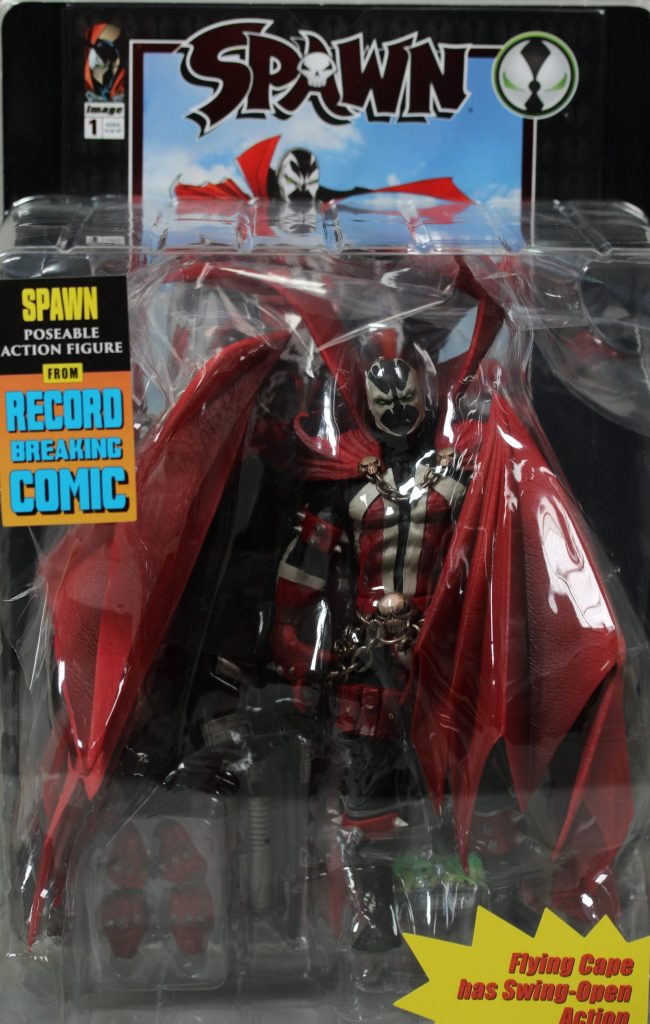 Inside the box is protective foam for the carded figure.  Mcfarlane spare no expensive in making sure that the figure was fully protected on its way to your home.  Above the figure you will see an extra “Hamburger” head for Spawn, a blade, ecto plasmic effects and my personal favorite, the Spawn sword.

The card is also resealable if you want to keep the figure pristine in the card.

Once removed from its protective foam shell, the figure is in a blister card which showcases both the figure, his accessories and a reprinted issue of Spawn number one by Mcfarlane. 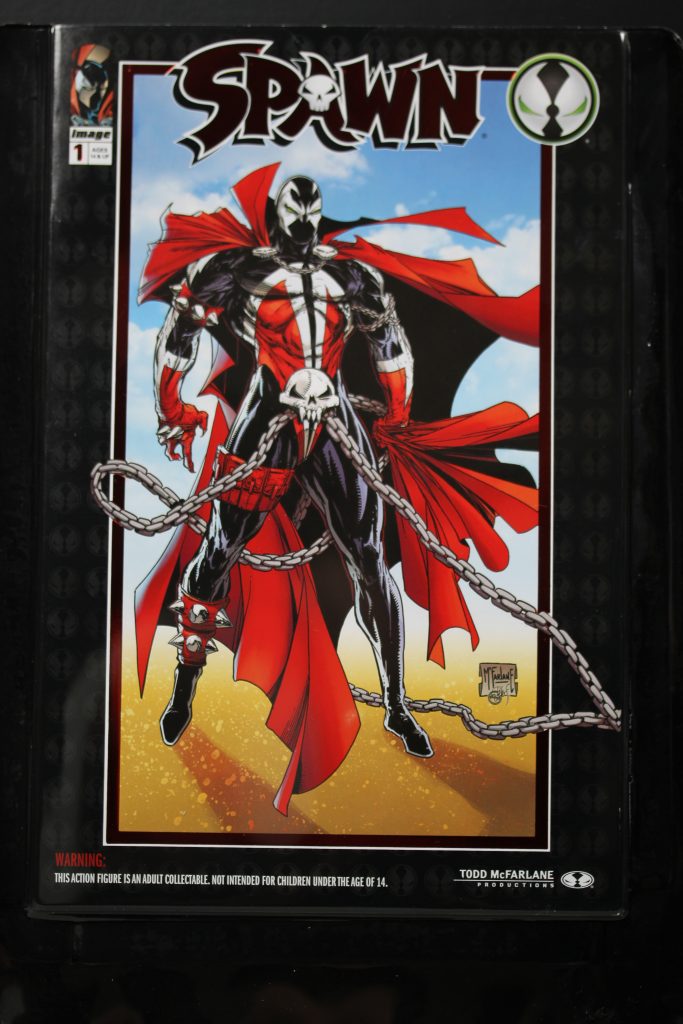 Special edition of Spawn number one with a new cover by Todd Mcfarlane. 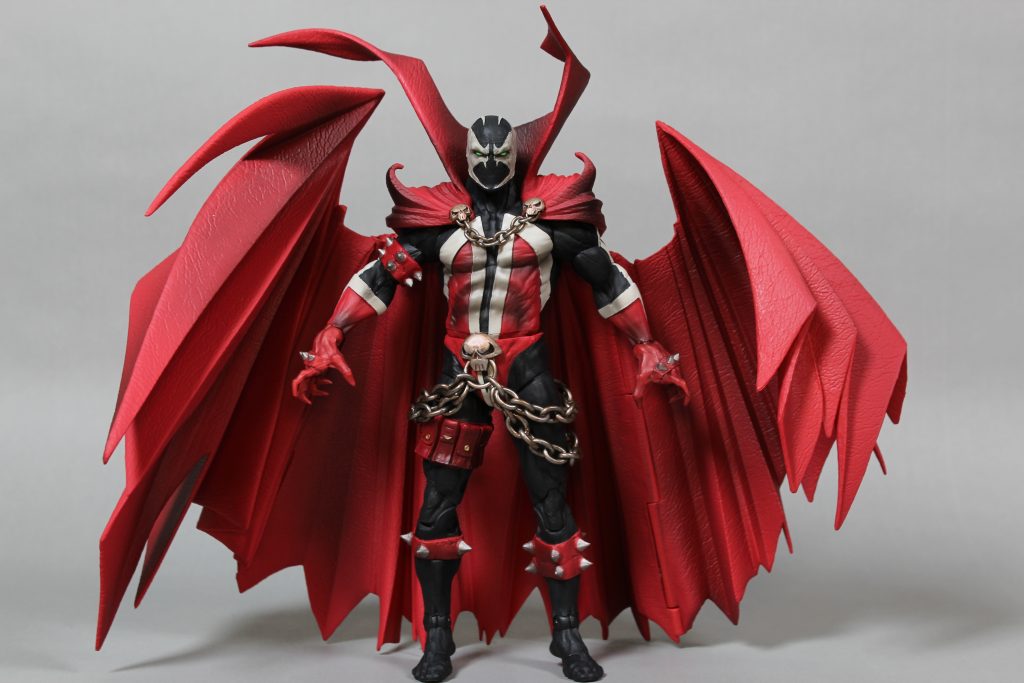 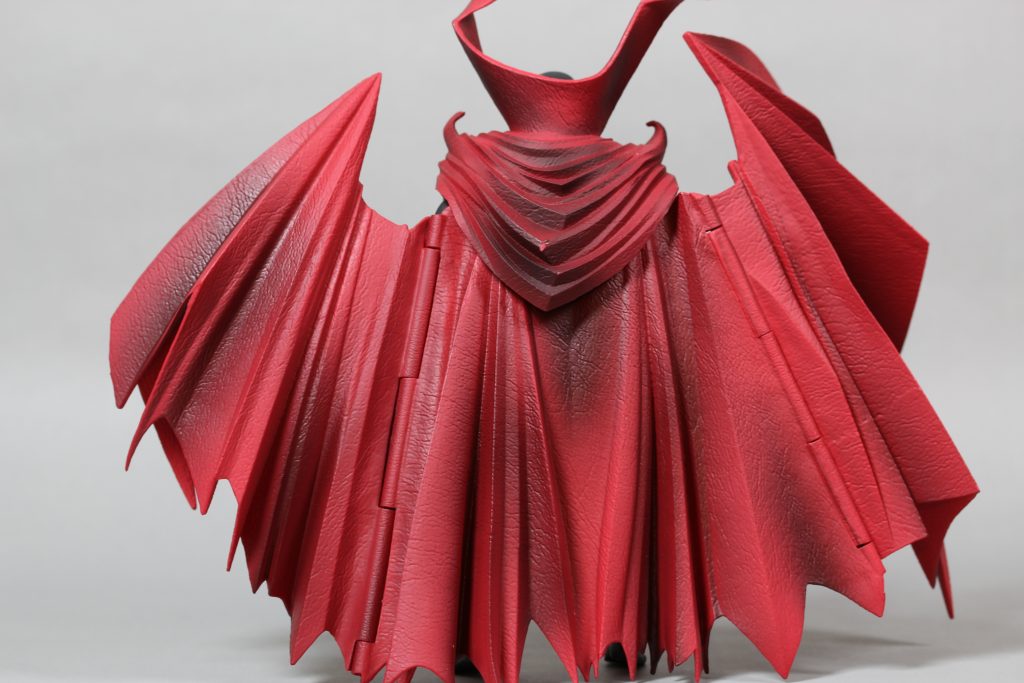 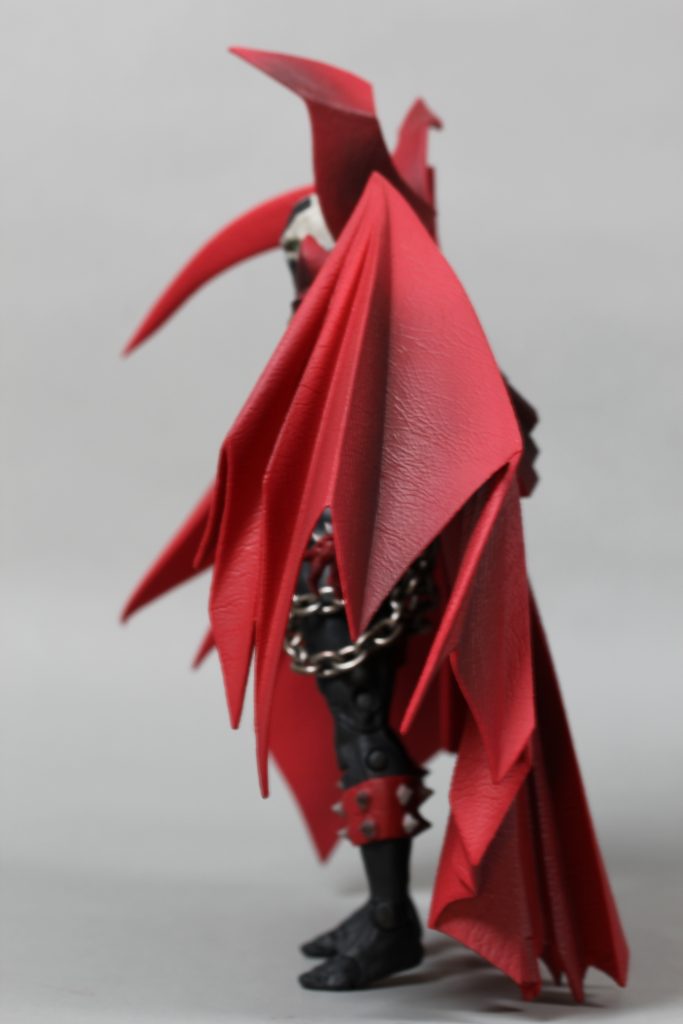 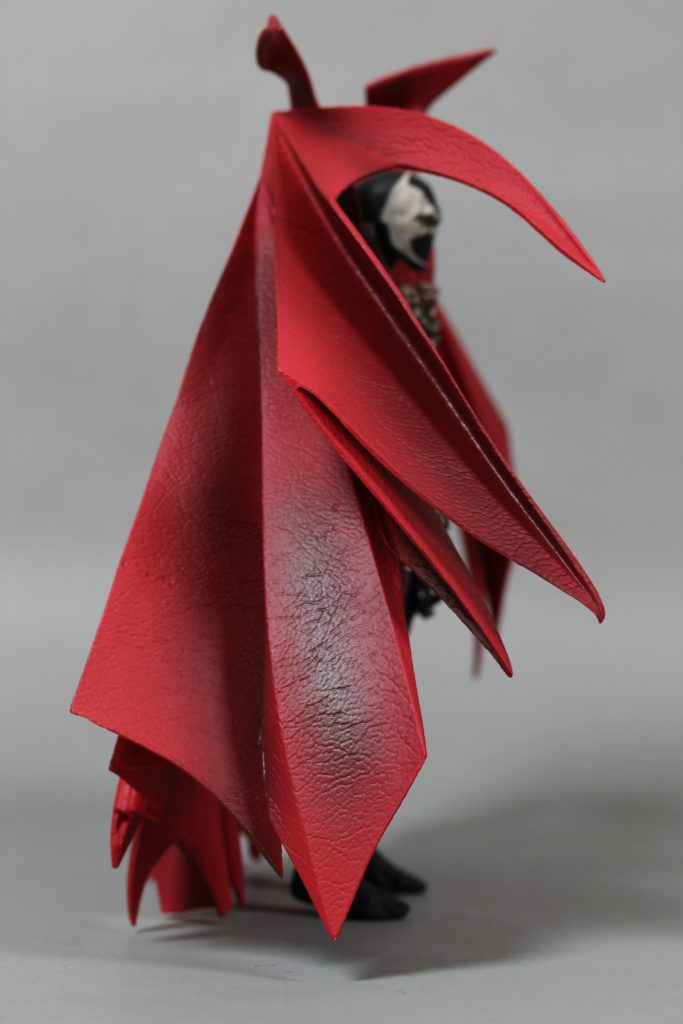 The figure stands about 7″ tall and about 11″ wide with cape.  The colors are beautiful without any smudges or rubbing.  Sporting 30 points of articulation in the head, shoulders, elbows, hands, waist, thighs, double joints on the knees ,ankles and feet.  Full rotation on the head and forearms and legs.  The cape is also articulated for opening and closing on the figure.

The colors on the cape also have black wash on certain parts for shadowing. 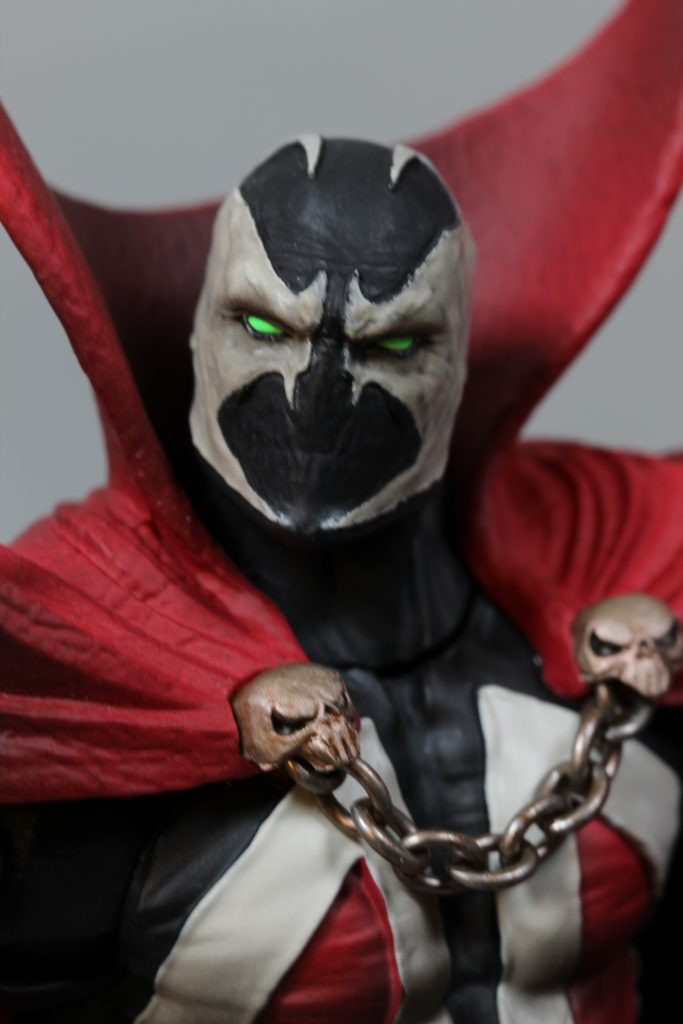 The details and deco on this figure is incredible, Mcfarlane really did as he promised and went the extra mile on details like in his original plan.  The chains are solid metal and you can really see the detail in the sculpt.  The spikes and pouches really bring me back to the original figure. 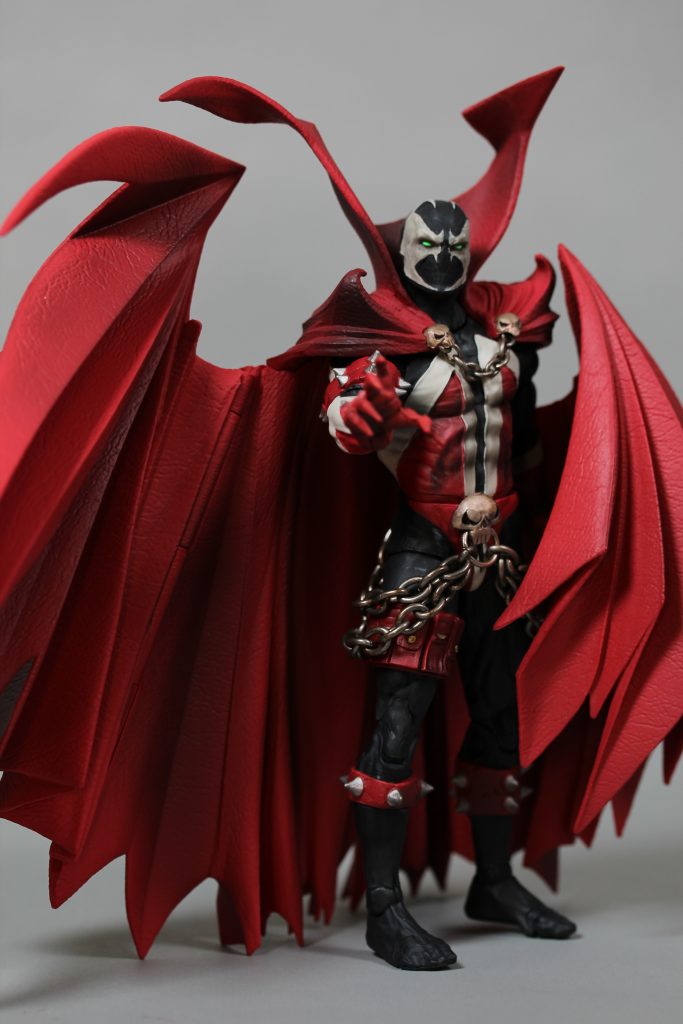 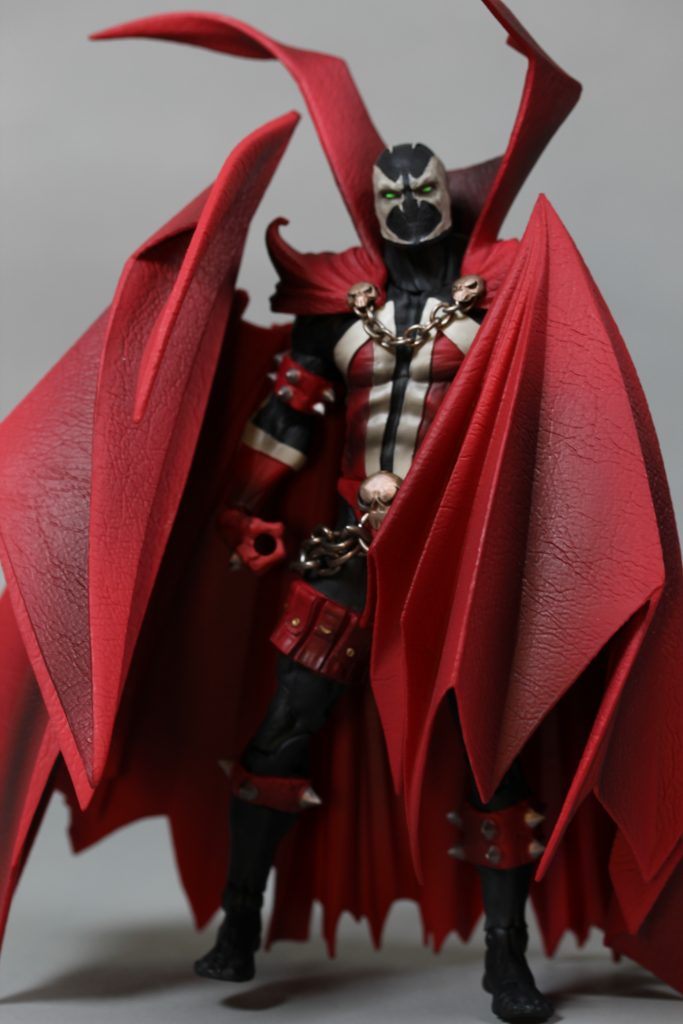 Included with the figure are three pairs of interchangeable hands and rifle. 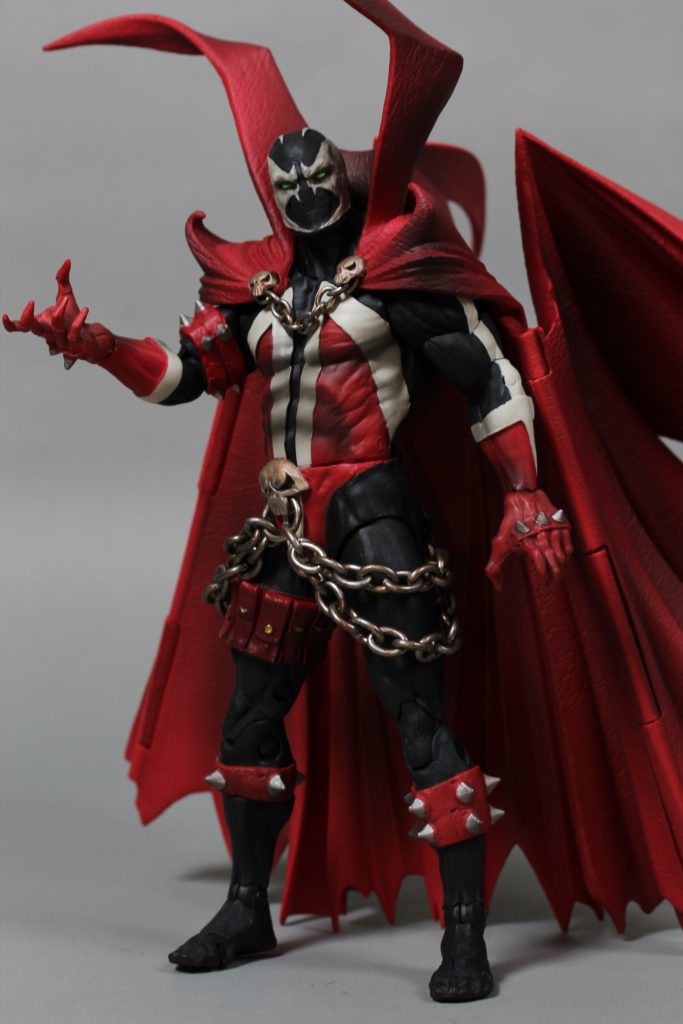 I love that the sculpt even includes texture on the cape. 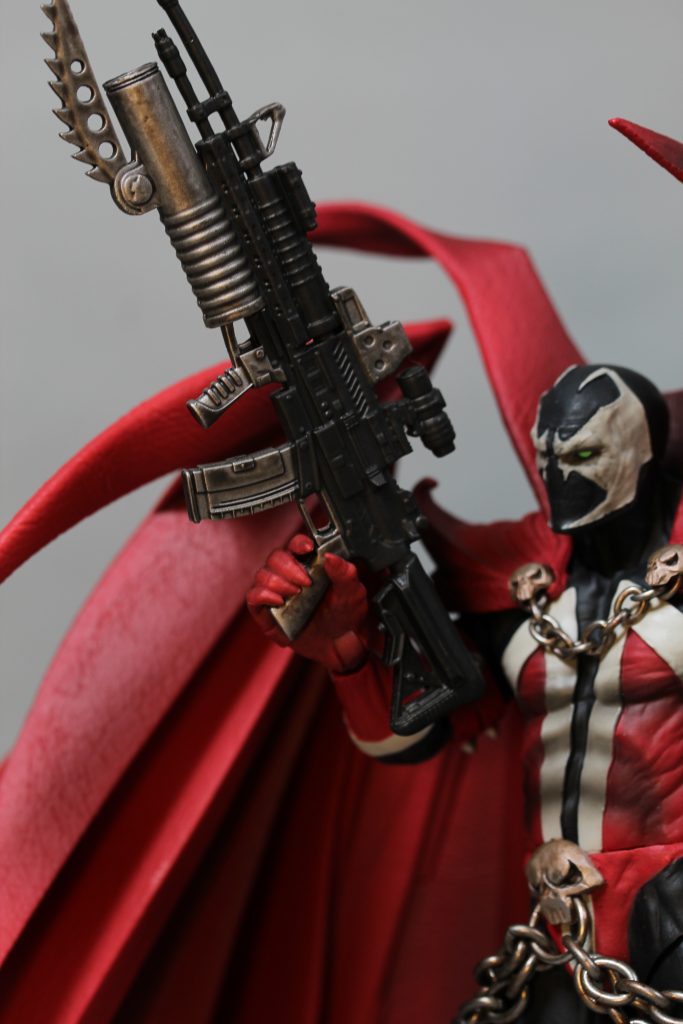 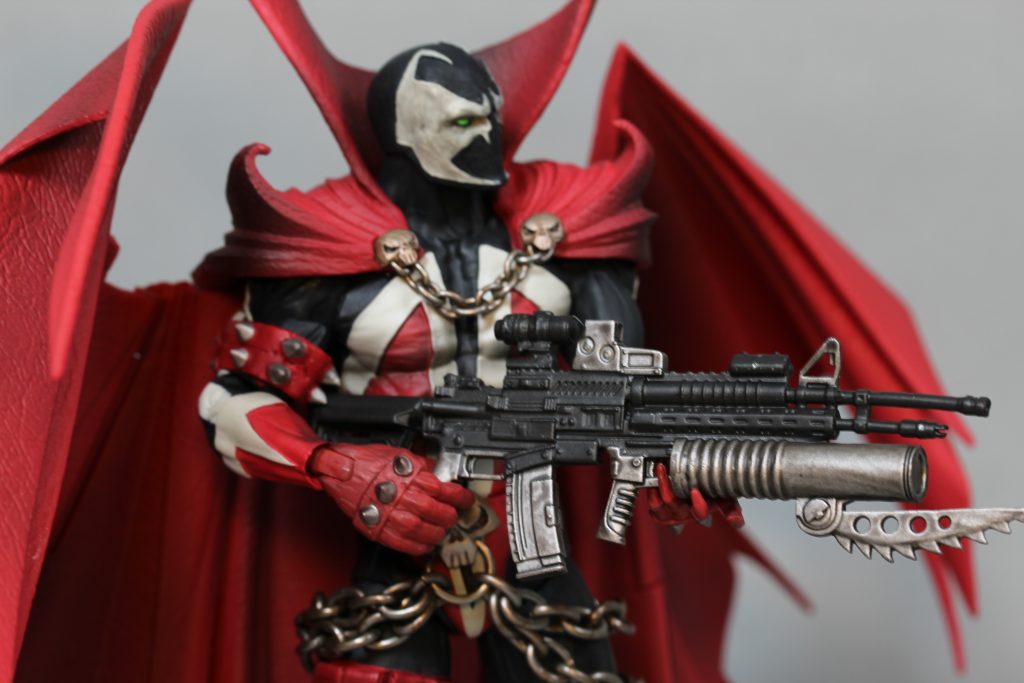 The articulation really lets you have a lot room to pose the figure in almost any way.  The rifle is also highly detailed and is based on issue seven of the Spawn comic series.

you can have some really fun with this figure as far as posing and playing (if you have the time). 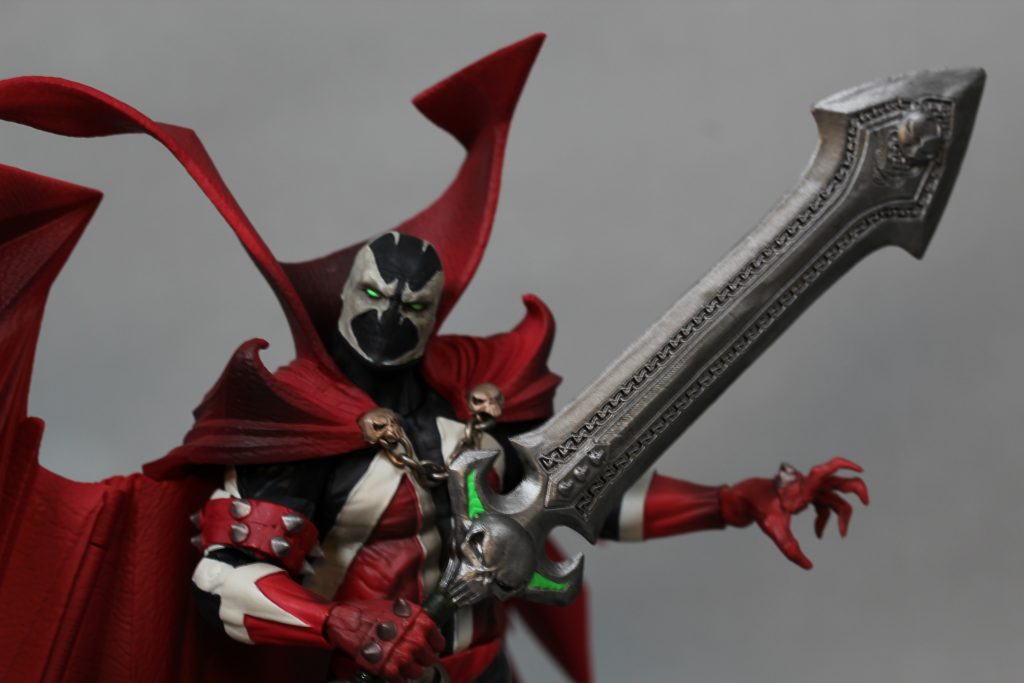 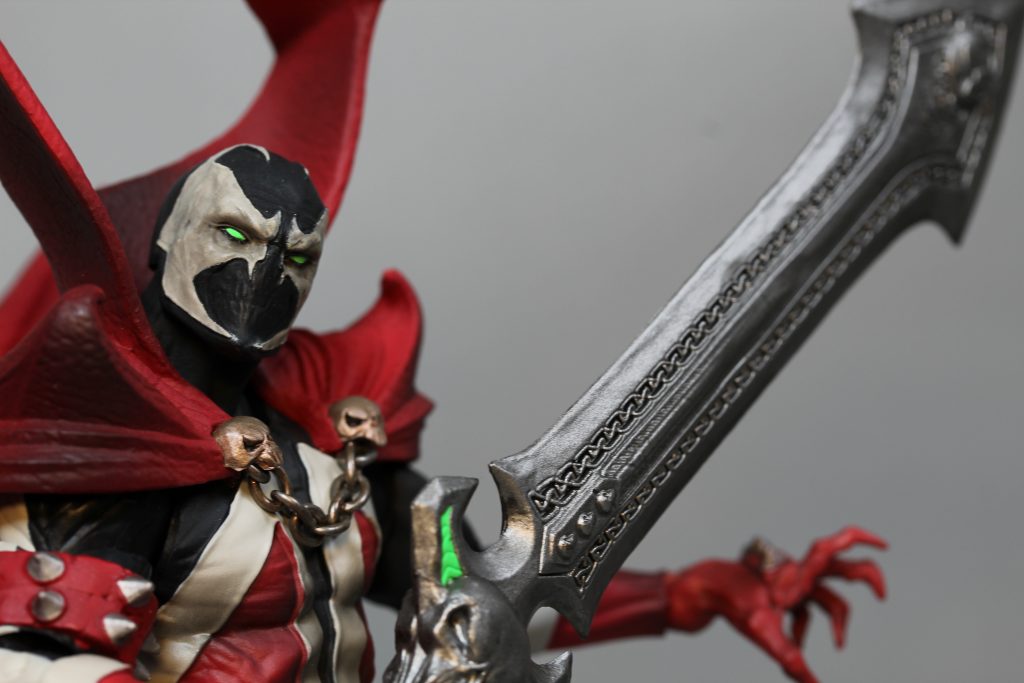 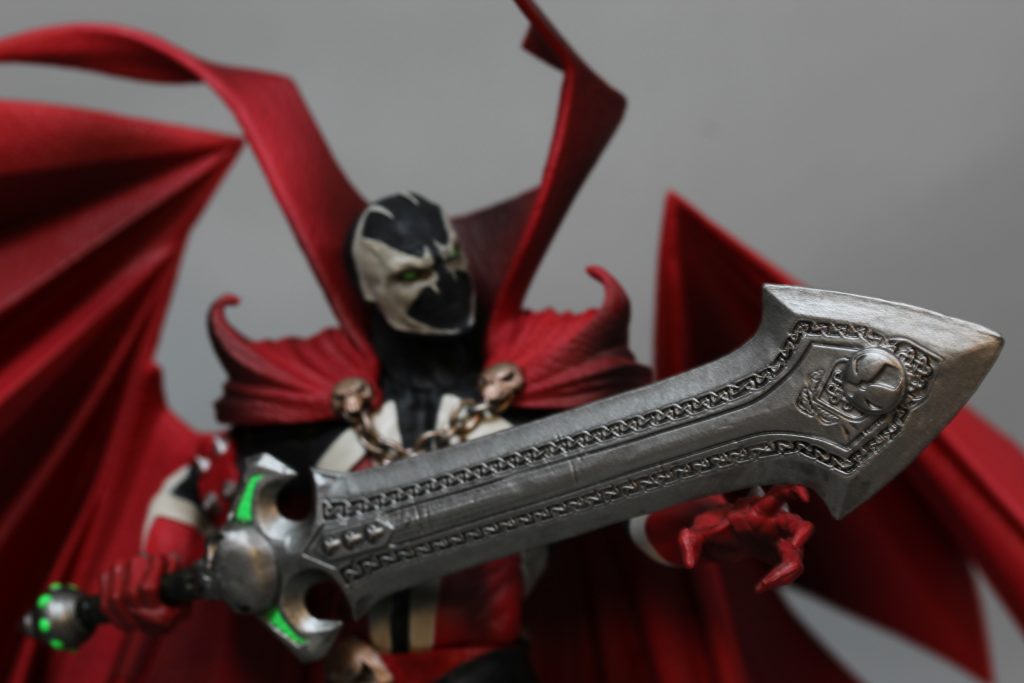 The Spawn sword is my favorite accessory in this figure.  It is oversized but it really works with this figure.  It fits perfectly in his gripping hand and does not throw the figure off balance.  You can get some really cool looking poses with the sword. 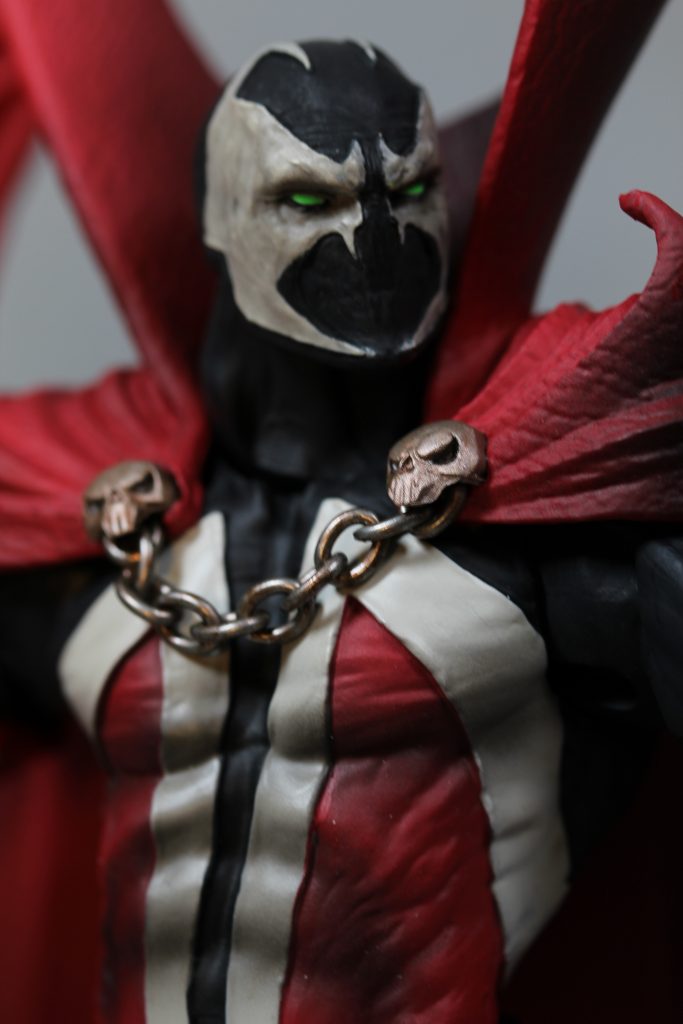 This award winning figure truly deserves its accolades for this figure.  Mcfarlane and his team have truly made something special by not only paying respect to what came before but also creating a symbol of what you can achieve.  Mcfarlane started out as the” little” toy company that was going to produce his characters but instead changed the face of the whole action figure toy industry with his figure Spawn and the action figure community is better for it.

This figure is more than an action figure, it is a tribute to what anyone can accomplish with a little hard work and tenacity.

This figure was available only on Kickstarter but you can still get one in the after market.  The figure can be purchased separately or as part of a trio which included an artist proof and a modern Spawn.

Todd Mcfarlane recently stated that his next Kickstarter figure will be Medieval Spawn.  If Todd and his team can create this incredible figure based on his original creation, I can not wait to see what he has planned for its medieval counterpart.